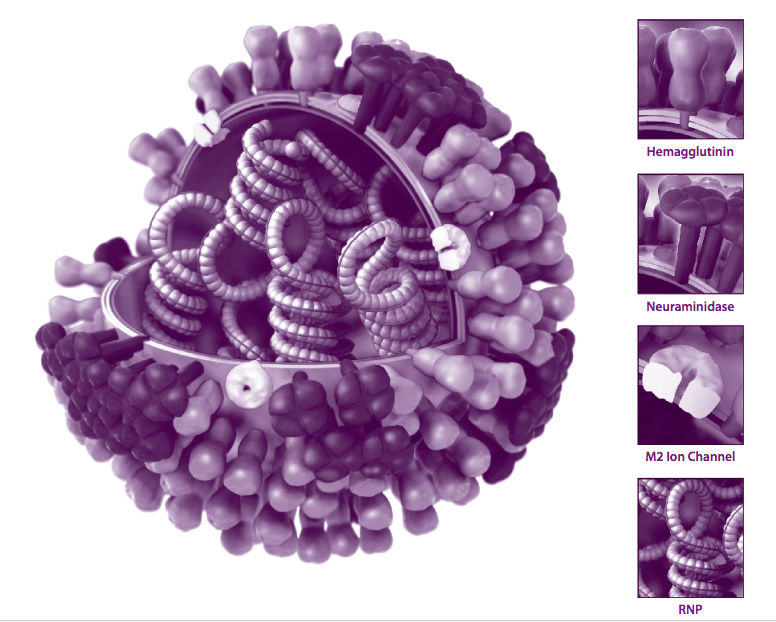 Seasonal influenza viruses are a major healthcare problem in terms of disease burden.

There are three main types of seasonal influenza viruses, labeled A, B, and C (related to their core proteins).

Only type A and B are problematic, and only type A, being the most pathogenic, is able to cause pandemics.

Influenza type A viruses can infect a variety of animal hosts, providing an extensive reservoir.

influenza type C causes milder infections and poses much less of a disease burden than A and B, so only A and B are included in seasonal influenza vaccines.

All influenza viruses bear two surface proteins, hemagglutinin (H) and neuraminidase (N), each of which there are several variations of.

Type A influenza viruses are further divided into subtypes according to the combinations of H and N present (eg. H1N1 is a subtype). Type B viruses are not further subtyped in this way.

Type A H1N1 and H3N2 are the current circulating seasonal A viruses. The current seasonal H1N1 virus is the same virus that caused the 2009 influenza pandemic. (CDC 2017)

There are currently two type B viruses that are in circulation, Victoria lineage and Yamagata lineage (B/Yamagata and B/Victoria), named after the location where they were first identified.

All viruses are further identified by strain.

The WHO accepted naming convention of viruses is based on: 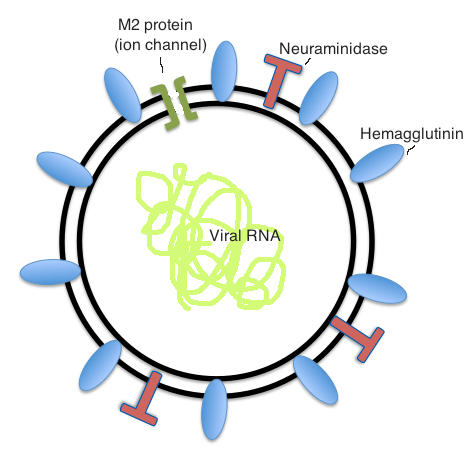 These are enzyme proteins located on the surface of the virus. It is these which the immune system will use to identify the virus - in other words, they are antigens. Antigens stimulate the production of antibodies, which are specific to the antigen.

Variation of these proteins over time enables the virus to evade the immune response, necessitating the formulation of a new vaccine each year.

The neuraminidase protein is an enzyme which enables the release of new virus from infected cells. It is also the target molecule of the anti-flu neuraminidase inhibitors.

The recent avian influenza outbreak is a virulent strain of H5N1, which has caused an epidemic amongst birds of all species, as well as crossing species into other types of animals including humans. For the time being in cases where humans have been infected, although highly pathogenic, further person-to-person spread of this strain of H5N1 has not occurred.

Each type of Influenza A can undergo ‘antigenic drift’. This is the occurrence of natural mutations in viral RNA, and results in small changes to the shapes of H and N. The result is a new strain, but the subtype (e.g. H1N1) remains the same. If the changes are only small the immune system will still be able to recognise it. But if there are enough accumulated changes then the immune system may not recognise the virus anymore, or only be able to provide limited initial protection, enabling re-infection. This is why yearly vaccination is required.

This is associated with cross-species mutations and more dramatic and sudden changes in virus subtype.

If the host cell is infected with two different types of viruses, for example one from a human virus and the other from an animal virus, the two different virus strains may combine their genetic material to make a new sub-strain. This process is called ‘antigenic shift’, and is what led to the Swine Flu virus in 2009. In this case the flu virus crossed over from an animal source, then merged with a human virus, which was then was able to continue to spread via human to human transmission.

Cross-species infection only occurs with Type A viruses. Antigenic shift results in different subtypes with either different types or combinations of H and N, and are so different from the regular circulating viruses that the immune system is completely unable to provide any initial protection.